The Community Behind Beer

Last night the GetKnit leadership team bellied up at Tin Whiskers Brewery in St. Paul for our monthly leadership meeting and as I sat there I glanced around their impressive taproom, just taking in what was happening all around us…community!  Groups of co-workers celebrating the end of the work day at a happy hour, a group of old friends playing one of the many games on the tables, a few couples on dates, some locals chatting with their “beertenders”, and our scrappy little meeting.  All of us with one thing in common – we were sharing a delicious, hand crafted beer.

While we local Twin Citians like to believe that it was the “Surly Bill” and local taprooms opening up that inspired this shift in how we engage with each other over a beer, the community behind beer goes much farther back.  In fact,many scholars and historians believe that beer is what caused early hunter-gathers  to change their nomadic, roaming ways and settle into one place to build cities.  In the book The Search for God and Guinness: A Biography of the Beer that Changed the World, author Stephen Mansfield draws the conclusion from a professor that “rather than early men relying on wild stands of barley to make brew, they would have begun growing the barley  themselves in homes of producing better yield.  And this attachment to their fields of barley would have caused them to settle in one place, to begin living in larger communities, and to eventually evolving cities from which civilization gets its name.”  Time and time again throughout history we see similar claims and the consistent fact that beer has been a large part of the formation of our civilization as we know it. 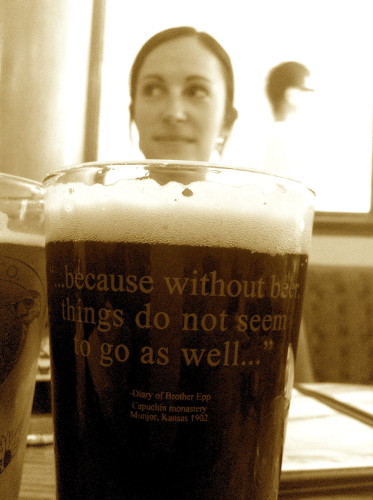 We then fast forward thousands of years later to my (and likely your) days in college, you see yet another layer to the community behind beer, albeit much less fundamental in the development to society.   Beer was of course at the center of the social scene in college and lead to many of the stories that  continue to be rehashed as “responsible adults”.

Now of course in my adulthood and in our society in general, beer continues to add to our community and the greater civilization that is forming around us daily.  It leads to all kinds of unique events and social gatherings.  It inspires us to live with wild abandon and do things that we might not otherwise.  It fuels our economy and helps integrate new businesses that better our city.   It gives us something to rally around and even to chant about from time to time.  Beer leads to community, and community is behind beer.